Your Sports Specific Training Is BullSh*t!

Sorry, folks it doesn't really exist.  And here is why...

You can't train aspects of the sporting environment in a gym scenario, nor should you.  This has been scientifically proven.  Much like my scenario in the video where it is referenced of a baseball player swinging a heavier bat to improve his swinging capability or a basketball player shooting a basketball that's heavier.

No, no, no, no you don't want to do that.  It's counter-productive.  It's going to make an athletes movement pattern change to the point where they're going to lose that edge that they have on the sport they're playing.

They are going to over-swing, off-shoot the basket, whatever.  They're not going to perform better.

Strength and Conditioning is designed to do these things...

It does not make you a better...football, basketball, baseball, or hockey player.

So in the gym you're going for these things.  Not improved sports performance per say.  It's an effect of if you're stronger you can produce more force.  You produce more force you can run faster.  You can knock an opponent down easier.  You can blow by a linebacker easier or absorb his hit and give him one back.

It's basically going to make you a better player, but you're not using a whole bunch of speciality moves created for that sport.

The body will adapt to the imposed demands of a particular activity.

Now all that being said there are some movements that would be more beneficial to football players than hockey players.  This involves movement analysis.

It's not that the exercises change by much, but more specialty movements that might be more specific to that sport.  Like prowler pushes for a football lineman.  That's pretty much their job; push an opponent around until the play can move by them.  Or a hockey player might focus on more lateral movements to help build up his lateral movement skills and hip musculature to improve his speed and performance on the ice.

But these are a few select movements per sport.  It's not like they're not squatting, deadlifting, power cleaning, snatching, benching, and doing pull-ups.  Most athletes do these to help build up strength and power.

In most cases some exercises might be avoid in some sports in order to not increase hypertrophy and loading potential on tissues used too frequently.  Like overhead presses and bench presses for a baseball pitcher.  The last thing you want is a pitcher sore or too tight from doing too much upper body work in the gym, so that he can't throw the ball effectively anymore.

The Right Way for Athletes to Train

Athletes need to train like every other human being.  Build up their General Physical Preparedness at an early age.  So, when you want to throw your kid into hockey every year, all year long, well you're not very smart.  Your kid is going to be at a motor development stage of one.  He'll be able to out skate and out puck handle everyone, but ask him to run a mile or swim a pool lap and he/she will be crushed.

Get your kids involved in everything you can and develop all of their abilities.  Swimming, running, walking, pushing, pulling, climbing, jumping, all of it.  They need all those motor patterns when they're aging.  It's much easier for them to learn them early and have an easy time going into adulthood with motor coordination that covers all the basis, versus learning how to squat correctly at 30 years old.  Not a fun time for anyone. 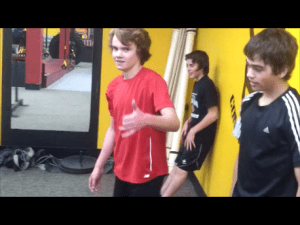 Then get them lifting some weights.  Bodyweight and movement patterns for young athletes.  Proper compound movements for the older athletes.  No bodybuilding type BS that everyone tries to program now.  Have them build up on the basics.  Have them learn how to squat, deadlift, power clean, snatch, bench, do a good pull-up, row and do some hill sprints.  If only this was the education the kids learned nowadays.  Or heck, even back when I was in school.

Then have them develop their sports through practice.  Yes, you practice a sport to get better at it.  You practice...a lot.  Do drills.  Run.  Sprint.  More running.  More drills.  Get better.

And then when you want to be the best at your sport you strength train more to get stronger, more powerful, more metabolically efficient so you can smash the competition. 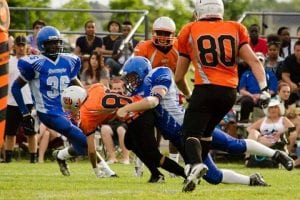 This is the whole reason why we have different disciplines in the sporting community...you have Strength Coaches at universities to help the team get stronger and stay free from injuries along with Football Coaches, Baseball Coaches, Hockey Coaches, etc., to get the kids able to perform on the field.  Otherwise why wouldn't one general coach run the whole show.