The Price You Pay To Look Like A Physique Model

So you want to look like a figure model?

Do you have what it takes?  Of course you do you're here right.

Okay, here you go...this is the Health and Fitness Scale (pictured below).  This is a graphical representation of what it's going to look like for a person who is going to go from a typical sedentary lifestyle to a level of elite level competition.

Whether that's in powerlifting, bodybuilding, physique or whatever other sport you can possibly think of, except maybe fishing or cards (but can we really call playing Texas Hold' Em a sport, I digress), but most major levels of physical or physique dominating sports involving hard, demanding training and/or associated with nutrition are going to follow along with this pattern of lower levels of exercise and poor nutrition being unhealthy and the highest levels of exercise and extraordinary nutritional practices being also unhealthy. 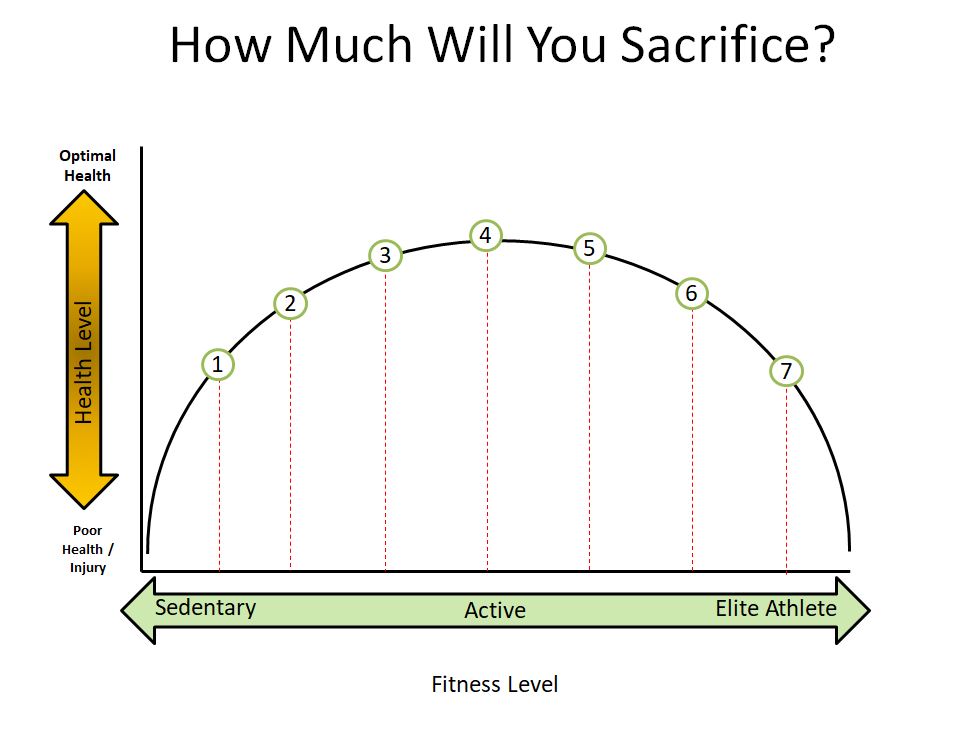 This leads one to question just how far they're willing to go to have that perfect body or the optimal level of human performance.

How much do you have to exercise and diet to get to an elite level of competition or look like you're average figure or bodybuilding competitor?

The answer is a lot.  It's going to be demanding and stressful, regardless of what type of sport or activity that you want to do.  The methods may be different as they would be for a bodybuilder in comparison to a elite level figure skater competitor, but the training demands on the body will always be high.  Often higher than most people are willing to accept or commit to, let alone recover adequately.

But I want "six pack abs"

On average your typical athlete in those elite or higher level sports will be training at least 5-6 times a week at a very high or fluctuating basis of high and low levels of intensity for months and months without a break.  They're also going to be very focused on their nutritional requirements whether it be lowering calories and/or increasing exercise to make or lose weight or they're going to be force feeding their bodies to gain more muscle or mass to accommodate lifting or increasing bouts of performance.

All in all they're putting their bodies to a great deal of stress to get the desired response out of their bodies in order to perform at a high level.  Most of which the body doesn't necessarily like nor can it maintain it for a long period of time.

However, the body needs these stressors in order to adapt.  You can't build a supernatural body without supernatural methods.

The real question is can you train at a very elite level and still be healthy?

The answer is of course.  It's possible to push the red line levels, but only for an finite amount of time.  At least if you're goal is to maintain your health.

Remember the body likes to remain in homeostasis, a place where everything is in balance.  This is true of everything within the body.

Something tries to disrupt homeostasis is like going on a prolonged low calorie diet to lose some extra fat.  For a while the body will tolerate the lack of adequate calories and drop some excess water, fat and muscle weight to accommodate the loss of calories.

Then after a few days it gets smart and starts dropping the overall metabolic rate to match the amount of calories coming in.  Then you're stuck at a new metabolic rate, not burning off enough calories to burn off anymore extra weight and the body is back in homeostasis with you looking frustrated into the mirror and wishing you could have a bagel.

Your body is pretty smart about these adaptations and with training it's the same thing.  It can either supercompensate if given enough time to recover and rebalance everything to create a new homeostatic baseline, but more often than not we're not giving it enough time to compensate for the damage and stress that we're putting on the body.

This is where it starts to get unhealthy, and one should be mentally prepared for this fact.

You can see this a lot in some physique athletes trying to maintain that ultimate "look" that they had onstage.  For many this is a dream to get up onstage and compete at the pinnacle of their physique gains...however, they're far from healthy at this point.  They are dehydrated, holding onto a super low level of bodyfat (which cannot be maintained long term), and their body is wrecked from constant bouts of training and cardio.  It's not healthy and cannot be maintained for long.

The same can be said of other sports, which lead to severe shifts in hard training, dieting down or up to make a weight or move more weight.  It's hard on the body.  That is the sacrifice you must be willing to make for the sake of performance at a high level.  Athletes will accept this as the cost of doing business, while the average health seeker doesn't see the dedication and diligence that must be upkept to keep making new gains.

This brings us to the ultimate point is that not all fitness activities are necessarily healthy.  Yes, people that engage in exercise are generally going to be far more healthy in the long run than your average couch potato, however, working out and dieting too much, too hard and for too long isn't going to be a healthy activity.

It's a plain and simple fact that too much of anything is going to be harmful at a certain point.  This is true of all things, including drinking too much water.  Yes, you can in fact drink too much water and actually die from it, it's a condition called hyponatremia where the volume of water in the blood is far greater than the amount of sodium content.

It's all a matter of how far are you willing to go?  Is getting to an elite level or looking like the physique model in the magazine that important to you?

Only you can decide how far you're willing to push the envelope.  For some, it's a part of the train, eat, sleep, train some more lifestyle.  For others you may need to rethink your goals and simply get a little bit better everyday and push towards what is going to make your life fun, enjoyable and live a fruitful life.